The Global Economy and Domestic Jobs

"Leaders in Washington should base their policy ideas on data and research, not anecdotes and assertions," say Slaughter & Rees. 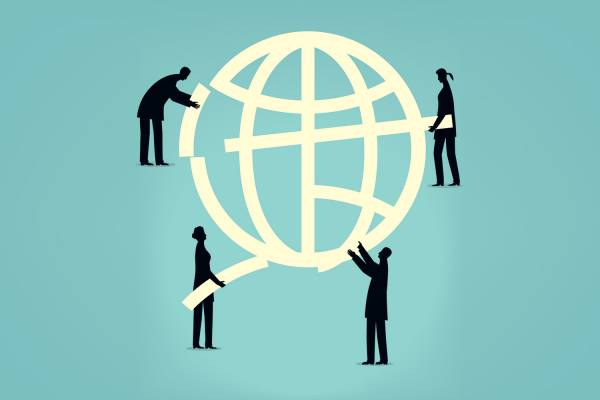 Since his earliest days, President Trump has voiced a widely shared belief that a major source of pressure on U.S. workers is U.S.-headquartered companies exporting jobs.

“One by one,” he intoned in his inaugural address, “the factories shuttered and left our shores, with not even a thought about the millions and millions of American workers that were left behind.” In his first White House meeting after the inauguration, he warned a roomful of CEOs of new border taxes “if you go to another country and you decide you are going to close [a U.S. factory] and get rid of 2,000 people or 5,000 people.”

The critical assumption behind this belief is that expansion abroad by U.S. multinational companies necessarily reduces their employment in the United States. But this assumption is wrong, and border taxes would hurt American workers, not help them. Last week, the Wall Street Journal kindly published an op-ed column by one of us (Matt S), which subscribers can access here, that examines this exporting-jobs canard.

Academic research has repeatedly found that expansion abroad in affiliates of U.S. multinationals tends to support their U.S.-parent jobs, not destroy them. More affiliate investment and employment is robustly associated with more investment and employment back in U.S. parents. How can this be? The exporting-jobs canard misses three crucial features of global business: complementarity, scale, and scope.

Consider the effect of each on employment. When firms employ many workers of many different skills and occupations, affiliate and parent labor are often complements, not substitutes, such that more hiring abroad stimulates more U.S. hiring as well. Affiliate expansion, to serve foreign customers or to save costs, expands the overall scale of multinationals—both abroad and at home, which often means more U.S. hiring. And affiliate expansion allows firms to refine their scope of activities: e.g., U.S. parent employment can rise in higher value-added tasks, such as R&D, marketing, and general management.

The total impact of affiliate expansion on U.S. parent activity is much richer than the overly simplistic story of exporting jobs. It depends on the predominance of complementarity, on scale effects, and on scope changes. The ultimate proof lies in the empirical evidence.

For example, look at total employment spanning the past decade of 2004 through 2014, the most recent year of U.S. government data available on multinational companies. Yes, over that time employment in majority-owned affiliates rose by 4.8 million, from 9.0 million to 13.8 million. But over that same period U.S. parent employment rose by nearly as much: 4.2 million, from 22.4 million to 26.6 million. In the recovery from the Great Recession, from 2009 through 2014 value-added and capital investment for U.S. parents grew faster not just than in their foreign affiliates but also than in the overall U.S. private sector.

More and more, jobs made in America are jobs connected to the world.

For many global companies there is no inherent substitutability between foreign and U.S. operations. More and more, jobs made in America are jobs connected to the world.

President Trump is exactly right that America needs millions more good jobs at good wages. But he is exactly wrong when he rails against the global connectivity of U.S.-based multinationals. Thanks to the large amounts of capital investment, exporting, and knowledge creation of these companies, they tend to create exactly the sort of high-paying jobs the president seeks.

All these productivity-enhancing activities contributed to the 26.6 million employees of these U.S. parents earning an average compensation of $77,104—a remarkable 34.2 percent above the average for all other private-sector U.S. jobs. These parents also create millions of good jobs in their suppliers. Contrary to conventional wisdom, fully 89.2 percent of all intermediate inputs purchased by U.S. parents—$8.8 trillion—were from other U.S. companies, not foreign imports.

Limit the ability of U.S. multinational companies to flourish abroad and you limit their ability to create high-paying jobs in America. Leaders in Washington should base their policy ideas on data and research, not anecdotes and assertions.