The Ascent of Autocracy

In their latest missive, Matthew Slaughter and Matthew Rees examine the rise of autocratic governments and the threat they pose to democracy and freedom throughout the world. 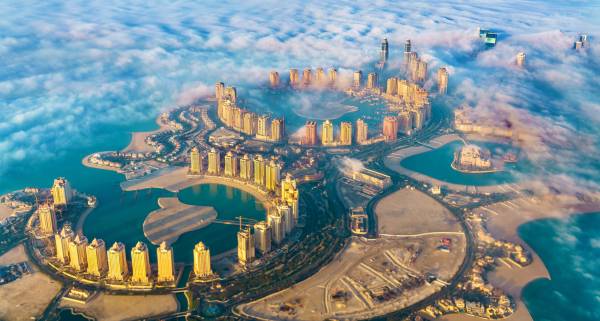 According to Freedom House, 38 percent of the world’s population lives in “not free” countries, including Qatar—a higher share than at any point since 1997.

With the eyes of the world fixed on the World Cup, it is inspiring to see sport helping break down barriers between nations. And yet the World Cup is being contested against the backdrop of an alarming new barrier that is separating nations beyond the pitch: the rise of autocratic governments juxtaposed against a corresponding decline of democracy and freedom throughout the world.

The ascent of autocracy is visible all around us. It includes Russia invading Ukraine and continuing to wage war there, Venezuela harassing and imprisoning dissidents, and Iran denying basic freedoms to its citizens—particularly women—while violently quelling peaceful protests.

The World Cup itself is being held in Qatar, a country labeled “not free” by Freedom House, a research and advocacy group that monitors democracy, political rights, and civil liberties across the world. Qatar’s label reflects a range of restrictions and limitations, such as a ban on political parties and the hereditary emir controlling the executive, judicial, and legislative branches.

The state of the overall world is similarly sobering. Freedom House reports that the state of global freedom has been declining for 16 consecutive years. Today 38 percent of the world’s population lives in “not free” countries, a higher share than at any point since 1997. A telltale mark of autocracies has long been their control of information reaching their citizens. Thus has Freedom House found 12 consecutive years of declining Internet freedom around the world. For the past eight years, China has held the dubious distinction of maintaining the world’s most restrictive Internet regulations. We see this playing out in real time this week as the government tries to quash protests against the restrictive zero-COVID policies by scrubbing Internet sites and by police spot-inspecting the mobile phones of people on the streets.

Today’s autocrats are increasingly trying to spread their global influence—and via tactics that go far beyond the conventional battlefield. Russia, for example, has contributed more than $300 million to political parties, officials, and politicians in more than two dozen countries since 2014.

Today’s autocrats are increasingly trying to spread their global influence—and via tactics that go far beyond the conventional battlefield. Russia, for example, has contributed more than $300 million to political parties, officials, and politicians in more than two dozen countries since 2014, according to a State Department cable revealed by the New York Times in September. Increasingly, today’s autocrats are also collaborating: recall the summit in February between Russia’s Vladimir Putin and China’s Xi Jinping, at which they agreed to cooperate on a wide range of issues for which they voiced “no limit”—just days before Russia’s tanks rolled into Ukraine.

In not-free countries, nonviolent protest movements by concerned citizens are faltering. Harvard’s Erica Chenoweth points out that from the 1960s until about 2010, nonviolent campaigns seeking regime change succeeded more than 40 percent of the time—and 65 percent of the time in the 1990s. But since 2010, the success rate of nonviolent protest movements has fallen below 34 percent. The New York Times recently reported that such movements are today more likely to fail than they were at any other point since at least the 1930s. Chenoweth told the Times that 2020 and 2021 were the worst years on record for people power.

Despite this bleak landscape, there is reason for hope. Enter Leopoldo López, a Venezuelan who served as mayor of a Caracas municipality from 2000 to 2008. The Venezuelan regime later disqualified him from seeking higher office, banned him from appearing in the national media, and eventually arrested him and sentenced him to 14 years of confinement. After serving seven years, he was able to escape; he now lives in Spain with his family, and one of us (Matt R.) has worked with him.

López has joined with two other leading dissidents, Masih Alinejad of Iran and Garry Kasparov of Russia, to mobilize activist leaders from other autocratic nations. Earlier this month, 180 of these leaders from 43 countries gathered in Lithuania, under the auspices of the World Liberty Congress. The goal of this congress was to build collaborations in the fight for human rights, civil liberties, freedom, democracy, and the rule of law (the compelling opening video can be seen here).

The free exchange of ideas has lain at the heart of human development in recent centuries. … Leaders of today’s democracies must summon the focus to recognize the problem at hand—and then the resolve to reverse the ascent of autocracy.

Rolling back the gains made by autocrats is an urgent challenge, and we two Matts have a professional kinship with those brave voices that autocracies too often try to silence. We write this monthly missive thanks to our positions at the Tuck School of Business at Dartmouth, one of America’s leading higher-education institutions. Over the years, each of us has also had the good fortune to have our ideas published in some of the world’s leading media outlets. Freedom of thought and expression, in the academy and in journalism, has been the lifeblood of our work. Yet it is fellow scholars and journalists whom autocrats often target for harassment, imprisonment, and worse.

The free exchange of ideas has lain at the heart of human development in recent centuries: from the scientific method to democratic republics. Leaders of today’s democracies must summon the focus to recognize the problem at hand—and then the resolve to reverse the ascent of autocracy.