Dean Matthew Slaughter and coauthor Matthew Rees share two public-policy lessons of the pandemic related to globalization and public health—one optimistic, the other less so. 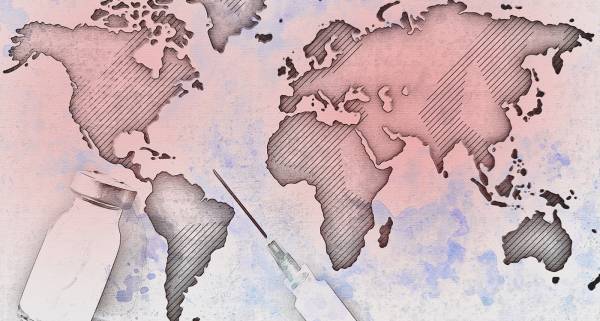 The invention and production of COVID-19 vaccines has been anything but a "Buy American" endeavor, say Slaughter and Rees, demonstrating just how powerful globalization and the worldwide flows of ideas, people, capital, and products in elaborate global supply networks can be for America and public health.

Hello after what we hope was a restful Thanksgiving holiday for those celebrating this past long weekend. Despite the ample turkey, stuffing, and good cheer, the pandemic continued its unsparing efforts. The discovery of the omicron variant sank global equity markets on Friday as the World Health Organization declared it a “variant of concern”; over the weekend it sparked a new round of travel restrictions against southern Africa.

We Matts want to step back from the immediate news to highlight two public-policy lessons of the pandemic that policymakers would be wise to heed even amidst their ongoing efforts at getting vaccines into as many arms as possible. One is optimistic, the other not so much.

The first, optimistic long-term lesson is that the dynamic forces of globalization continue to generate very large gains for America.

The path out of the pandemic is being paved by stunningly effective vaccines. And the invention and production of these vaccines has been anything but a “Buy American” endeavor of just American ideas, workers, and inputs. Rather, vaccines have appeared only thanks to the worldwide flows of ideas, people, capital, and products in elaborate global supply networks.

As we have often argued, high-talent immigration boosts innovation in start-up ventures and existing companies alike. Three of the pharmaceutical companies that have invented some of the most powerful vaccines—BioNTech, Moderna, and Pfizer—were all founded by immigrants.

Any notion that any single country could have alone summoned the know-how, components, and capital goods to make COVID-19 vaccines is pure fantasy.

Ugur Sahin, the cofounder and CEO of Germany’s BioNTech, arrived in the country as a child whose dad immigrated as part of that country’s guest-worker program. Ozlem Tureci, the company’s cofounder and chief medical officer (and Sahin’s wife), is the daughter of a Turkish doctor who also immigrated to Germany. U.S.-based Moderna was cofounded by a group that includes Canadian biologist Derrick Rossi and Lebanese engineer Noubar Afeyan—who earned his PhD from MIT and was initially able to stay in America postgraduation thanks to winning an H1-B visa, the value of which Matt S has written about here.

Charles Pfizer moved from Germany to the United States in 1849 and soon thereafter cofounded his eponymous company along with his cousin, fellow immigrant Charles Erhart. In the words of William H. Stevenson III, writing for the German Historical Institute, “According to his daughter Alice, his motivations for immigrating to America were similar to those that prompted many ambitious young men to make the voyage: a greater opportunity to advance faster and further in his profession and a desire to live in a land of freedom and liberty.” Pfizer’s current CEO, Albert Bourla, is an immigrant from Greece.

Once these companies invented their vaccines, they needed to make them. As Chad P. Bown and Thomas J. Bollyky meticulously document in their new paper, gearing up production has been a deeply global affair: a “choppy process through which dozens of other companies at nearly 100 geographically distributed facilities came together to scale up global manufacturing … complex global supply chains emerged behind the scenes—in many instances nearly from scratch—to produce the billions of doses of vaccines that have become household names.”

Any notion that any single country could have alone summoned the know-how, components, and capital goods to make COVID-19 vaccines is pure fantasy. In the words of Nobel laureate (and Matt S’s dissertation adviser) Paul Krugman, “the case of vaccine production illustrates a positive side of globalization we tend to forget. These miracle vaccines are incredibly complex products that would have been hard to develop and produce in any one country, even one as large as the United States. A global market made it possible to deliver all the specialized inputs that are saving thousands of lives as you read this.”

The second, sobering long-term lesson is that the poor state of public health continues to generate very large costs for America.

The poor state of public health continues to generate very large costs for America. … There have been 236 [U.S.] deaths from COVID-19 for every 100,000 people. That is the highest mortality rate in the world among developed nations.

Why is America such an outlier here? Because of the extremely poor state of public health in the United States. As pointed out by Dariush Mozaffarian, dean of Tufts University’s Friedman School of Nutrition Science and Policy, COVID-19 has been “a fast-moving pandemic overlaid on a slow-moving pandemic” that’s been driven by poor metabolic health. Several chronically high rates of health problems—heart disease, drug abuse, gun violence, and obesity—meant that U.S. average life expectancy pre-COVID-19 was just the 45th highest in the world. (A National Academy of Sciences report, U.S. Health in International Perspective: Shorter Lives, Poorer Health, is a must read on this topic.). COVID-19 has had a disproportionate impact on the large segment of Americans already in poor health. A study from earlier this year, coauthored by Mozaffarian, estimated that 64 percent of all COVID-19–related hospitalizations could have been prevented in the absence of obesity, type-2 diabetes, hypertension, and heart failure.

All of this gets into why the U.S. has such poor health outcomes, amid a very modern health-care system. There is no simple explanation, but the focus on treatment over prevention is certainly part of the problem. Consider that less than three percent of total U.S. health-care spending goes toward public-health efforts to keep people from falling sick. A recent New Yorker piece by Atul Gawande argued that Costa Rica has better health outcomes (and longer life expectancy) than the United States, even with a lower level of spending, thanks to its comprehensive public-health system focused on prevention.

The development and distribution of COVID-19 vaccines has been one of the great achievements of globalization for the United States (indeed, for the entire world). But these vaccines won’t do anything to mitigate the country’s chronic health challenges, which will endure long after COVID-19 and its variants have been overcome. Policymakers should heed both these lessons.