What Will Help Resolve America’s Great Resignation? Jobs Connected to the World

As the U.S. faces the Great Resignation, Slaughter and Rees remind policymakers that the strongest jobs in America have long been those connected to the world through international trade and investment. 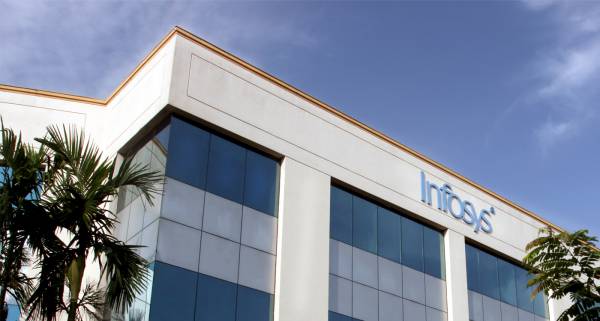 Infosys, a global leader in digital services headquartered in India, is an example of an affiliate of a global multinational that is providing inspiring work and rewarding wages in America, say Slaughter and Rees.

Hello, and happy fall. After our usual summer break and an unusually busy start to the fall, we two Matts are glad to be back, and we hope that all remains healthy and safe with you and yours.

Here in late October, the United States is thankfully realizing important progress in the pandemic battle, with the number of new cases sharply declining over the past two months after the delta-variant surge. This choppy recovery of public health is reflected in another choppy recovery: in the U.S. labor market.

U.S. unemployment continues to fall (currently down to 4.8 percent). And nominal wages are rising—but so, too, is price inflation, such that over the past 12 months through September, real average weekly earnings for all U.S. employees have fallen by 0.8 percent. And the U.S. labor force participation rate (61.6 percent), while slowly rising, is at its lowest pre-COVID level since September 1976. This low participation rate is part of what is contributing to one of the oddest features of this choppy labor market: excess demand. In August there were over 10.4 million job openings across the U.S. economy—but fewer than 7.7 million Americans were unemployed that month, a record gap of nearly 2.8 million. That same month, a record 2.9 percent of American workers quit their job. These twin records of excess job openings and high quits some have dubbed the Great Resignation.

So, what are workers seeking? In some broad sense, what they have always been seeking: inspiring work at rewarding wages. What exactly that means coming out of a pandemic is far from clear. This presents a challenge for policymakers seeking to broaden and strengthen the labor-market recovery. But here is one long-standing fact that policymakers should hold in mind: on many dimensions, the strongest jobs in America have long been—and are still today—those connected to the world through international trade and investment.

What is an example of an affiliate of a global multinational that is providing inspiring work and rewarding wages in America? Infosys, a global leader in digital services headquartered in India.

While it might seem surprising for an India-based company to be investing in the U.S. labor market, Infosys is far from a typical company. It was founded in 1981, a decade before India’s major economic liberalization began. Thanks to visionary leaders and a convergence of technological progress and global economic liberalization, the company’s revenues rose from $1.4 million in 1991 to more than $13.5 billion in its most recent fiscal year. Much of this growth came from helping companies in developed countries create jobs in lower-cost locations, such as India. But today, nearly two-thirds of the company’s revenues come from the United States, and it is investing heavily in the dynamism of the U.S. workforce.

That focus is on vivid display in the outskirts of Indianapolis in the form of a 100,000 square foot building that the company developed on property that was once the city’s airport terminal. The building, which includes a 250-person residential facility, is dedicated to training and reskilling workers—whether they are Infosys clients or the expanding roster of Infosys employees. The company has hired 13,000 people in the United States since 2017, and it expects to employ 25,000 people by the end of next year. They also have “technology and innovation centers” in Arizona, Rhode Island, Connecticut, North Carolina, and Pennsylvania.

Ravi Kumar, the president of Infosys, is based in the United States, and he’s taken a deep interest in how the U.S. labor market has been evolving in recent years, emphasizing the need for lifelong learning. The economic impact of the pandemic, he says, “has made radical reskilling an even more urgent priority for job seekers and employers alike.” Last year, the company joined a consortium focused on helping companies address their reskilling and employment needs.

Today, nearly two-thirds of [Infosys’s] revenues come from the United States, and it is investing heavily in the dynamism of the U.S. workforce.

But even before COVID, he saw the labor market shifting. Appearing on a panel at the recent Milken Institute Global Conference, he talked about more and more people walking away from jobs because they haven’t been seeing upward mobility. Creating that upward mobility, he said, depends in part on embedding a learning infrastructure into companies, particularly since skills are depreciating more quickly. He also sees the need to provide more flexible work arrangements.

To act on this vision, Infosys is diminishing its focus on credentials and is hiring more workers who may not have an undergraduate degree. Kumar has explained the shift by saying, “If you know stuff and can demonstrate that you know stuff and have been upskilling yourself with online training to do the task that we need, you’re hired. We think this structural shift—from degrees to skills—could bridge the digital divide.” Infosys is now hiring from community colleges, about 250 people per quarter—and Kumar has said that of these hires, “They’re much more sticky to us, they have a sense of aspiration and hunger to perform and achieve.”

Globally connected companies like Infosys have long created some of the highest-opportunity jobs in America. As our country makes its way through the Great Resignation, policymakers should remember this important fact.